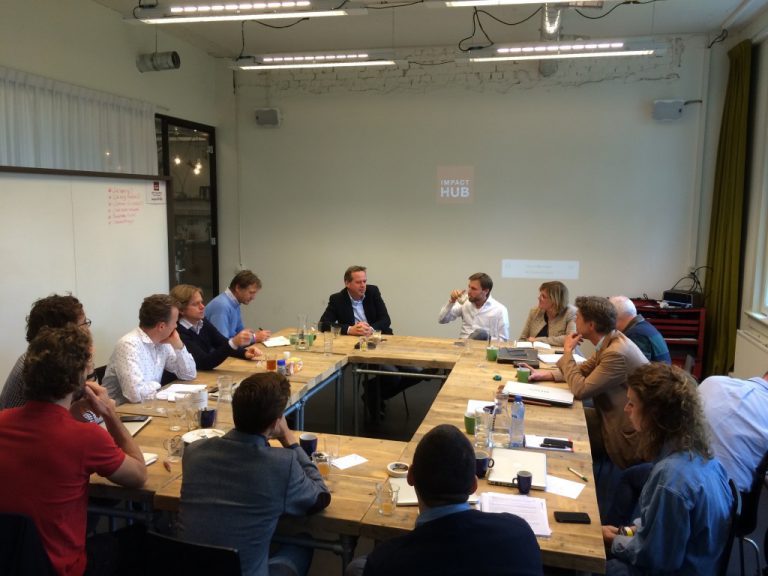 On the first day of the program we had an in-depth conversation with Reinier Mommaal, one of the founders and former CEO of DyeCoo Textile Systems. DyeCoo introduced a revolutionary waterless dyeing technology to the market. He provided the cohort with his valuable insights while talking about his journey from prototype to first production.

Instead of using large amounts of water and chemicals to dye textile, DyeCoo uses a high pressure CO2 process. Now how do you get a traditional industry to use such a revolutionary technology? Reinier explained how important it is to build strong, strategic partnerships already in an early phase. When DyeCoo only had a small prototype of their revolutionary dyeing technology to show for, they started collaborating with a textile-factory in Thailand. They could test their full-size prototype until it was good enough to start first production.

Get the brands on board

Once their full-size prototype was working, they invited some large fashion & sport brands to come and have a look. It is important to get the brands behind you for market acceptance in a traditional industry.

Compared to the existing dyeing technologies, the investment costs of the waterless dyeing technology that DyeCoo introduced are higher. However, operational costs are lower, providing an advantage over the traditional technology in the longer run. Besides that you don’t need additional chemicals and large amounts of water for the dyeing process, nor do you need to treat the wastewater.

Lesson #2: market acceptance of a revolutionary technology won’t happen without getting important brands behind your technology

So why would a brand get behind such a technology? Well, consumers became more conscious. Also Greenpeace ran a campaign to make the textile industry cleaner called the “Zero Detox Challenge “. So there was pressure, and if you don’t go first, then your competitors might be the first. DyeCoo needed to be smart as a small player. So they initially started with two large brands strongly supporting & investing in their technology.

Complement your team with key skills and knowledge

In the phase where DyeCoo was negotiating with potential investors they could not afford to make mistakes, Reinier involved two advisors that could really help him with that. A person with extensive expertise in mergers & aquisitions in order to build solid agreements with partners and a lawyer with years of experience negotiating with investors . So select your advisors well, and keep it to one or two, not many.

Lesson #3: strategically select your advisors, and keep it to one or two, not too many

Also, in different stages you need different people. When DyeCoo got to the stage that they needed to optimize the technology, organisation and process, they attracted a new CEO that could really make those improvement steps with them.

Reinier’s story touched upon strategic issues that all of our 10 participants get to deal with in their enterprises. Of course everyone got the chance to ask him questions, and of course the conversation went into a lot more detail then we can cover in this blog. So thank you Reinier for sharing those details and leaving us inspired.